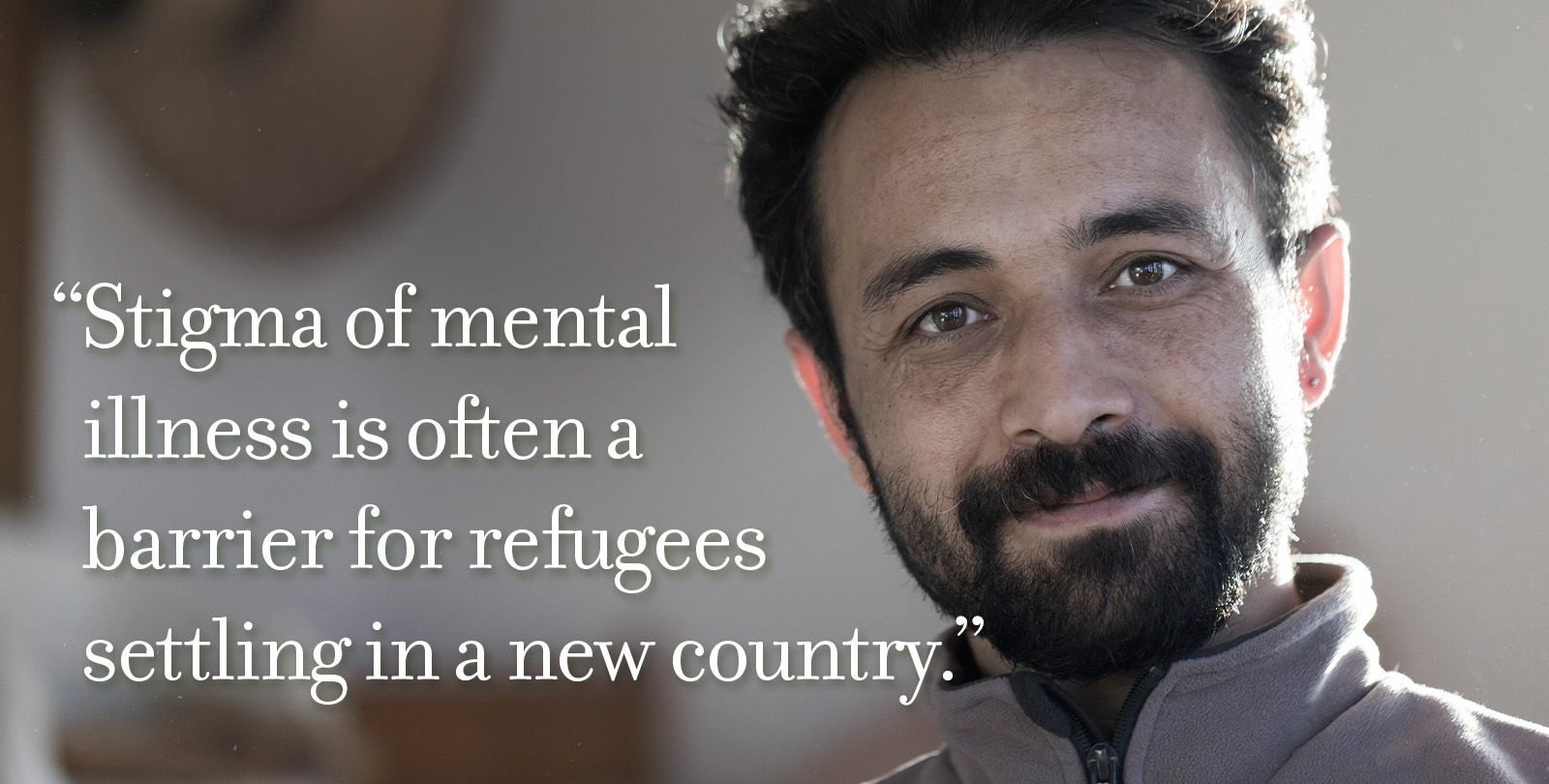 Since 2002, more than 16,000 refugees have resettled in Buffalo from countries around the world including Burma, Bhutan, Iraq, Iran, Somalia, Eritrea, Burundi, Liberia and more.

“Since refugees are persons who have fled their homes and countries due to war and persecution and have lost everything, it’s not uncommon to see mental health issues that afflict others who have experienced severe, prolonged trauma, like veterans who served multiple deployments in Iraq and Afghanistan or children who grew up in abusive households,” Karen Andolina Scott, chief executive officer, Journey’s End Refugee Services.

The most common mental health challenges are PTSD, anxiety, and depression, most often the direct result of the catastrophic life changes they experienced. 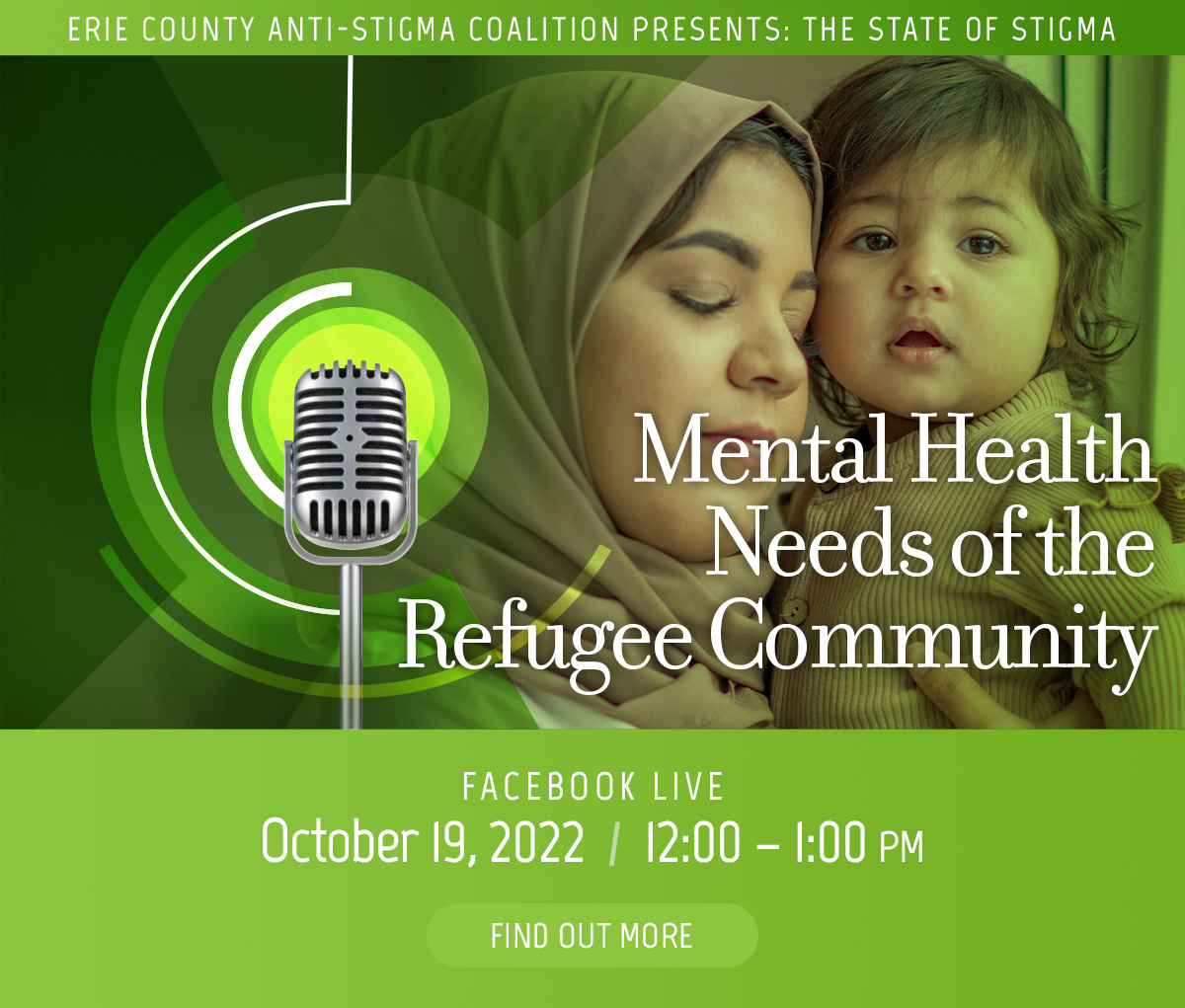 The Erie County Anti-Stigma Coalition will host a Facebook Live on Wednesday, October 19 at noon to discuss how migrants and refugees can be exposed to various stress factors which affect their mental health and well-being before and during their migration journey and during their settlement and integration. Join us for a discussion about these mental health challenges, stigma, and how services are delivered. The event is free and open to the public.

Stigma of mental illness is often a barrier for refugees settling in a new country.

“Added to that is the overwhelming human imperative just to survive once they became refugees,” she said. “Refugees continue to feel the pressures of having to be strong and resilient even once resettled, and it can be difficult for them to reach out for help. Language barriers also are a very big challenge in seeking mental health support, as well as finding professional services that are culturally sensitive to the special circumstances that refugees have gone through.”

Three key areas are considered when thinking about mental health for the refugee and immigrant community: pre-migration, migration, and post-migration. Each phase is associated with a host of mental health considerations and experiences.

During Pre-Migration, individuals may experience childhood trauma, pre-existing mental health conditions, experience of war, torture, and other instances of trauma. Migration is particularly arduous as individuals have fled their country and are either living in refugee camps or detention facilities that are crowded, unsanitary, and short on food and other supplies. During migration, individuals and their families are also subject to kidnapping, smuggling, and other crimes. A common occurrence is separation of families or even death of loved ones. Pre-existing mental health conditions may be exacerbated and untreated as a result of lack of access to services. Anti-immigrant sentiment is commonly experienced as individuals make their way through different countries. While the Post-Migration, or resettlement, phase is meant to be a safe end to their journey, many experience loss of culture and language, continued exacerbation of mental health conditions, lack of access to services depending on legal status and income, persistent worry about friends or family who are still in an unsafe location, and continued anti-immigrant sentiment. Children experience the often-stressful feeling of living between cultures, putting strain on family dynamics and relationships.

Jewish Family Services Refugee & Immigrant Center for Healing (R.I.C.H.) offers many resources including the Survivors of Torture and Trauma Systems Therapy programs. Each are designed to support those who have experienced or been exposed to refugee trauma or political and state-sponsored torture.

Immigrant-serving agencies and organizations are introducing new services and programs to address these concerns and start conversations about stigma in the different communities.

According to Danielle Bernas, manager of R.I.C.H. Survivors of Torture, stigma is still a major concern for those who are considering seeking out mental health services. “There has been a shift in the way services are offered,” says Bernas, “in that services are being informed by the communities themselves as opposed to traditional westernized methods being the only options available.”

This past year, Jewish Family Services of WNY Survivors of Torture program served individuals from over 27 countries. Conducted in partnership with Journey’s End Refugee Services, University at Buffalo Family Medicine, and the student-led Human Rights Clinic at the University at Buffalo School of Medicine, the Survivors of Torture program is based upon an intensive, strength-based, client-centered, care coordination model.

The Trauma Systems Therapy program is a multi-phased initiative to address the complex mental health needs of young refugees from elementary school through high school.